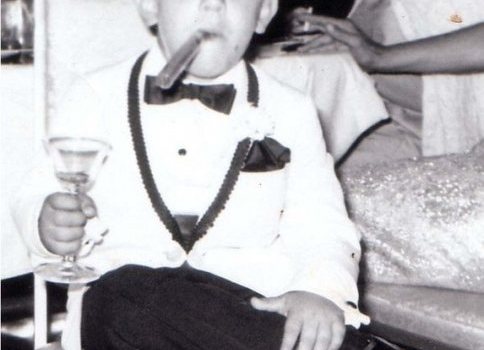 “As far back as I could remember…I always wanted to be a comedian”.

When I was eight years old, my mind was already made up, I was going to be a standup comedian just like the greats, I already knew it 100 percent. I would tell my mother back then that I wanted to be a comedian and she never said you shouldn’t, and she knew it was in me. My mother Catherine would let me stay up late and watch Johnny Carson if I saw he was having a comedian on that night, I would check the TV Guide every night. Alan King, Shecky Green, Jackie Vernon, Jerry Lewis, Steve Martin, Jimmy Walker, George Carlin, Bob Newhart, Richard Pryor, Robert Klein, just to name a few of my early heroes of this business I loved so much, of course later that list would grow. I was never the class clown in school. Funny yes, goofy, no. I am not going to bore you why I wanted to become a standup; I’ll save that for another blog post.

when i was 8 years old acting like George Burns.

1986 Inverness FL., me and my little group of friends were hanging out at the Huntley Jiffy Store on Hwy 41 in Inverness, my mother just sold the house and we were getting ready to move back up north. I was telling my friends…next time you see or hear from me, Ill be a comedian… they didn’t argue, they believed me because they knew I had it in me, even then. 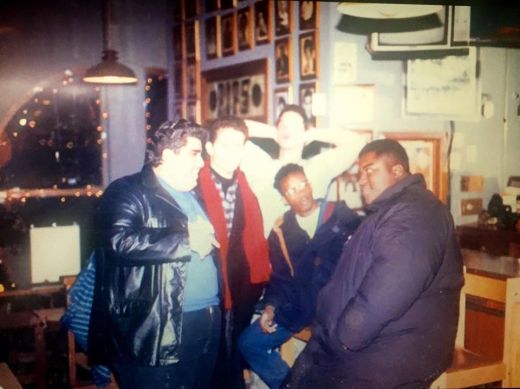 Me and some of the Comics at PIPS COMEDY CLUB. Brooklyn NY. 1988

1987 Brooklyn NY. While walking down the street with my, I guess you can call her a girlfriend. I saw a sign outside a comedy club called Pips in Sheepshead Bay Brooklyn, the sign read “OPEN MIC NIGHT EVERY WED” so I looked at her and said, I am going on next week. She thought I was nuts and I went on that following Wednesday and killed it with out even knowing what I was doing…that was it, I was addicted. Shortly after she gave me an ultimatum, either go to Pips or be with her. I told her, “Hey I am on in 30 min, take care”.

The Final night at the Riviera Hotel and Casino in Las Vegas. The taping of my CD, “Driving you Crazy”. The Riviera was home to some of stand up comedy’s greats.

Not to shit on the new comedians of today, but they shit on themselves, they have no debth, no soul, no experience and no passion for the true art of standup comedy. They think, setup and punchline, they think because they were abused as a child, people will laugh at the pain, they don’t think funny, and they think PC, or they try to use shock as a way to get cheap laughs. Basically with a few exceptions most of today’s comedians…suck. All they want is film and television, they want to waste the stage time for the talented because they think an agent is going to love the “my relationship sucks’ routine. They don’t know funny. Why? Because they are not paying attention, they are to self centered and think they are headliners because they have a mediocre 6 minutes. I remember a comedian who won one of the first “Last Comic Standings” Dat Phan was his name and I think he is still out there. He would work a comedy club and headline for the weekend but he would suck because he only had like six “ok” minutes so the feature would have to pick up the slack. That’s pathetic to me.

Here is my advise to new and young comedians. If you want to do what I and so many other great comics out there do, then you need to pay attention to what is funny. It all does not have to be exactly the truth, it needs to be fucking funny, it needs to make people laugh their asses off not just chuckle. You need to go on at real places where real comedy is being done, you must learn to use your face, your voice and your timing and delivery to cause an effect and make the crowd react, not sit and yawn. Standup comedy is an art, it’s not something that you “think you can do”. Comedy is calculated, its about control, its about selling yourself every fucking night with funny things you say and do to make a crowd of people laugh and feel great when they leave. If you cant do that, then stay the fuck out of our business.

Now some of you reading this may be saying that my grammar and punctuation sucks. See! To busy trying to find fault in others then finding what’s funny and learning…pay attention to the funny!

Pips Comedy Club 1989. First place i ever went on.